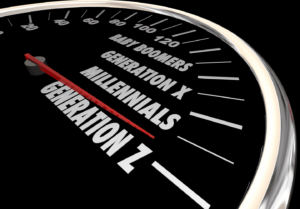 Many of us are unsuspecting victims. We have all watched movie scenes in which extraterrestrials transport an innocent victim from their environment only to return them later. The unfortunate abductee typically retains no memory of the experience; however, they intuitively sense something is different. Their surroundings look the same, yet unexplainably, time has passed leaving them feeling out of step – the once familiar now uncomfortable, even foreign. The experience is disorienting and frustrating, often with traumatic consequences. In an environment of cataclysmic and unrelenting change, it is easy to experience a similar effect, the feeling we are missing time, because we are.

Today, each successive generation is encountering a life experience that is alien to the generations prior. Thus, each develops an entirely unique worldview and differentiated value set. Further amplifying this disparity, is the nature of our algorithmically sorted and infinitely connected world. Accordingly, once diffuse cultural norms and values have become increasingly concentrated as they converge, and ultimately collide, in a struggle to define and dominate an evolving and progressively uncompromising narrative. These increasingly incongruent life-journeys serve to foster an inter-generational disconnect with Baby Boomers and Gen Xers feeling they missed something as they struggle to comprehend what motivates and inspires those their charge.

This confluence of events has profound implications, especially for leaders. For how does one lead a population they don’t understand, into a future they are struggling to comprehend? This challenge is further exacerbated by the fact that often the most influential and powerful leaders are also the most cloistered. Their isolation generating a significant imbalance between their authority and their acumen.

Currently, there is no better example of the consequences of this imbalance than Vladimir Putin’s decision to attack Ukraine. Mr. Putin has been widely lampooned for a catastrophic miscalculation in his decision to invade Ukraine. I would argue his failure to comprehend the operating environment should not be a surprise. Mr. Putin has occupied the highest, and therefore, most insulated position in his nation since 2000. That’s before Amazon and Google were household names, and 4 and 6 years before the founding Facebook and Twitter, respectively, and 7 years before the iPhone was introduced. Consequently, it is highly likely that the context for his worldview is massively distorted to the point of obsolete.

Mr. Putin’s efforts to reconstitute the former Soviet Union via World War II tactics provide evidence of the cost of goals set in service of memory and the ignorance associated with missing generational time. As horrific as they are, the events in Ukraine and Mr. Putin’s folly, provide a valuable lesson by demonstrating a vulnerability that haunts many in positions of authority today. The illusion that: old methods effectively address emerging challenges; that adaption will not be required to seize future opportunities.

The only way for leaders, especially senior leaders, to reduce their inherent generational disconnect and contribute productively, is to acknowledge that while they may have more life experience, they do not have a shared life experience. They must also concede that some of the time-tested lessons they hold sacrosanct may no longer be relevant or productive.

History does not define the future, but it can inform it. Accordingly, effective leadership demands we study the history of the generations ahead. Their experience has been, and will continue to be, dramatically different. As such, their experience is both relevant and critical, as their proximity to the future provides the best vantage point for the road ahead.

Memory is not vision. And pursuit of the past has never paved the road to the future.