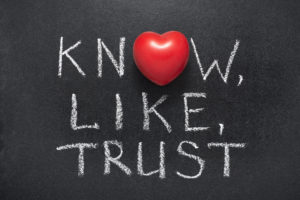 I first heard this maxim when I got into sales in 1992. Prior to that I had been a professional pianist in the New York City area. Completely different line of work. I met my wife when she booked me to play piano at her wedding to another man. She never married that guy. Obviously, there’s a back story there, which we don’t have time to get into now. So I got out of the music biz and got into sales – completely out of my comfort zone. I would literally throw up every morning on my way to my first sales call. But I loved my wife and love will make you get outside of your comfort zone and do things you wouldn’t ordinarily do.

Shortly after getting into sales, I heard that “know, like, trust” statement. And in my naiveté, I believed it. It just seemed to make sense to me. And here’s the kicker, I took it very literally. I said to myself, “Assuming that a person is good at the technical aspects of their chosen profession, shouldn’t about 99% of their time and effort be put into becoming more knowable, likeable, and trustable?” You may want to read that again. Don’t be fooled by the simplicity of what I just said. It’ll change your life.

So I became good at the technical aspects of my chosen profession – my basic sales skills and the features and benefits of the product or service I was selling – but I doubled down on what I call the “KLT Factor.” The Know-Like-Trust Factor. Within a few years, I was blessed to be the top salesperson for four separate companies in four separate industries including being the top salesperson in the world for an international consulting company with more than 350 salespeople in 15 countries. I don’t say this to boast, I say it because it’s validation of the KLT Factor.

If you’re in sales, and even if you’re not technically in a sales role, you’re in the people business. Regardless of your product, service, industry, role, function, whatever. I don’t care what you do. You could be the best in the world at what you do, but if you can’t get people to sincerely know, like, and trust you, you may as well be the best person in the world at what you do on an island with a volleyball named Wilson.

Just about everyone has enough stress in their life. They have enough of their own, they don’t need yours or mine. So if you’re not the most positive person in every room you walk into, you have a fundamental misunderstanding of what you do for a living. I’m not trying to turn you into a motivational speaker. I’m just trying to help you stack the deck in your favor. In a sincere, authentic manner. This isn’t about manipulation. It’s about being a ray of sunshine in an often dark world. Think about it. Do you know, like, and trust downers? Those folks who darken rooms just by walking in? You can’t afford to be one of those folks. If you’re looking to have a high KLT Factor, you need to be someone who causes others to smile.

The good news is that it’s very simple to be one of these folks because the bar is set so low. Committing to reading a positive or inspirational book for 10 to 15 minutes per day will have a ripple effect in your life and in your business. Perhaps set a goal to be the most positive person in every room you walk into.

And now one final point. You need to have a system or method to stay top of mind with the other person in a way that’s not slick, salesy, awkward, or creepy. Again, the bar is set so low that this is actually quite simple. By looking at the other person’s social footprint – their LinkedIn, Facebook, Twitter, Instagram, Pinterest, etc. accounts – you’ll be able to see their interests. Perhaps send them a link to something they have an interest in once a month or so. No one else is doing this with them. Everyone else is sending them thinly veiled and not so thinly veiled sales pitches.

So let’s recap. All things being equal, people will do business with and refer business to those people whom they know, like, and trust. Decide to observe yourself for a week. Or a month. Observe your communications. Your emails, phone calls, face to face conversations, etc. Is what you’re thinking, saying, and doing leading to know, like, trust? Or is it leading to NO, like, trust? We’ve never had the tools at our fingertips which we have now. You’re literally a mosquito in a nudist colony of opportunity. Take a sincere, authentic interest in people as people not just as revenue. Understand that you’re playing a long game. And your life will never be the same. You’re sitting on a gold mine….